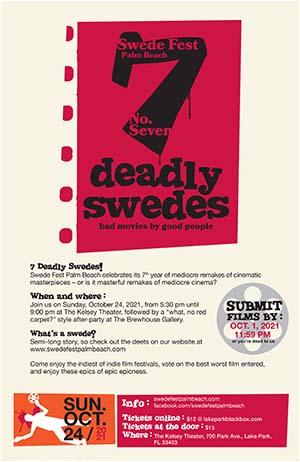 BUT WHAT’S A SWEDE?
Indie film festivals have a rich history of showcasing amazing undiscovered talent, where Hollywood insiders troll for the next big thing, where A-list stars promote the small, labor-of-love projects they do between blockbusters. This is not the case with the annual swede fest™ palm beach. Instead, a “swede” is a no-budget, laughably bad remake of a hit Hollywood film. The term comes from the 2008 comedy, “Be Kind Rewind,” which started an underground sweding craze and resulted in the very first swede fest™ in Fresno. Next came swede fest™ tampa bay, and swede fest™ palm beach ushers in its 7th (ish) year on October 24, 2021. “Red Carpet” entry starts at 6 pm with screenings from 7 pm to 9 pm at the Kelsey Theater in Lake Park.

WHO SHOULD ENTER?
Anyone with any type of camera. Submissions are free to enter. Films must be under three minutes and PG-13, even if the “source material” is not. This means finding creative ways to get around any violence, objectionable language, and nudity.

ENTRIES:
Open call begins now; the deadline is October 10th. All films must be submitted through Dropbox or similar digital transfer platforms. All of the rules and submission guidelines are on the pbfilmsociety.org website, along with example swedes from the other swede fests for…inspiration.

COST:
Free to enter a film; tickets to the event are $12 per person.
Tickets may be purchased at www.lakeparkblackbox.com.

INFO:
For those interested in sweding a film, email info@swedepalmbeach.com and call dibs on the film. swede fest™ is not a competition, so we try to avoid comparisons that come from multiple swedes of the same film. We recommend swede-makers embrace the amateur nature of sweding and opt to use found objects rather than spending any real money making these movies. The actual genius comes from how one’s personality and/or sense of humor shines through.

WHO:
The evening will be emceed once again by the hilarious improv troupe, Cheese & Crackers. The Palm Beach Film Society, a non-profit dedicated to promoting local film makers and film making in Palm Beach County, is the presenting organization in partnership with the Lake Park Black Box Kelsey Theater.