THE PALM BEACHES SCORE A TOUCHDOWN 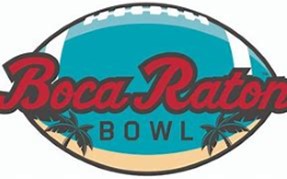 It was a battle between Rockets and Flames! Football fans crowded into FAU Stadium last month for the annual Boca Raton Bowl between the University of Toledo and Liberty University. The Liberty Flames were looking to keep their perfect 3-0 bowl record, but Toledo had other plans, turning the game around in the fourth quarter to capture the win their first bowl game in seven years.