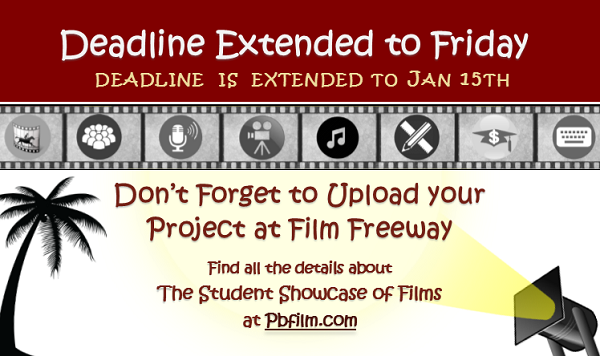 Palm Beach County, Fla. (January 12, 2016) — Florida’s student filmmakers have a few more days to enter for a chance to showcase their movies and commercials to a crowd of top industry professionals and hundreds of fans, in addition to winning cash awards for their work through the Student Showcase of Films (SSOF). The Palm Beach International Film Festival (PBIFF), in collaboration with the Palm Beach County Film & Television Commission, extended the deadline for the SSOF’s 2016 competition. Film students enrolled in Florida high schools and colleges can submit their entries no later than Friday, January 15, 2016 by 5:00pm for the chance to compete in what is Florida’s largest student film competition.

The one of a kind awards show will take place at the Keith C. and Elaine Johnson Wold Performing Arts Center at Lynn University in Boca Raton, FL on Friday, March 11, 2016 at 10 a.m.  For more information about the Student Showcase of Films, please visit pbfilm.com or Facebook.com/StudentShowcaseOfFilms. This program is funded by the PBIFF, the Palm Beach County Board of County Commissioners, the Palm Beach County’s Office of Economic Sustainability and the Palm Beach County Film & Television Commission.