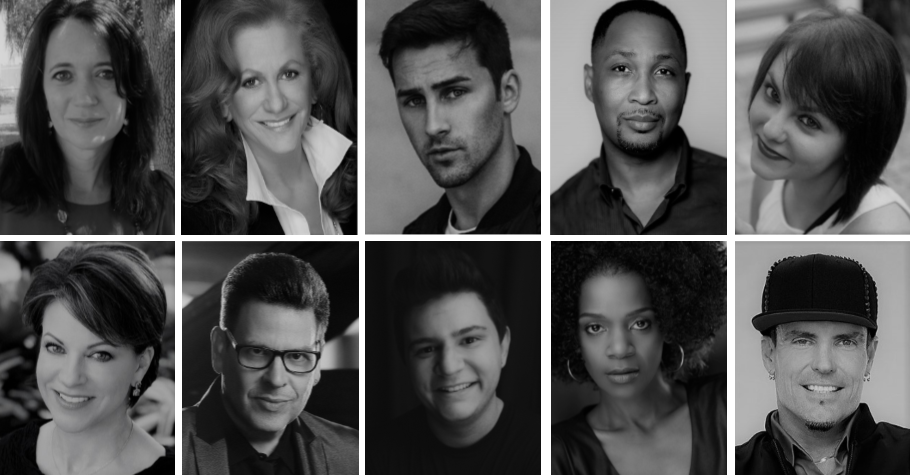 Joyce Belloise – Ms. Belloise is the Vice President of Content & Community Partnerships at South Florida PBS.  A third generation South Floridian, Joyce has written and produced content for public television for over 20 years.  From local public affairs discussions to magazine shows, from wildlife programs to a travel series and internationally distributed documentaries, she enjoys exploring our state's unique culture, ecosystem, and attractions.

Cody Johns – Mr. Johns is an actor, recording artist, and digital content creator from South Florida. Johns found success as not only a social media personality, but also a pioneer in digital-based Journalism and Marketing.

Omar McClinton – Mr. McClinton is the head of production at Echo Bridge Productions, a full-service award-winning animation studio based in St. Petersburg, FL, which specializes in 2D, hand-drawn animation for feature films, commercials, music videos, video games and more. McClinton has 30+ years of experience producing for film and television and managed the IMAX VFX crew for The Dark Knight movie.

Mary Murray – Ms. Murray is the executive editor at Palm Beach Media Group, where she works on Palm Beach Illustrated and Naples Illustrated magazines, as well as the company’s newest title, Fort Lauderdale Illustrated. She holds an English/Creative Writing degree from Florida State University and a Master’s in Arts Journalism from Syracuse University’s S.I. Newhouse School of Public Communications. She frequently writes personality profiles and travel articles for PBMG and covers the arts for Palm Beach Illustrated, including managing an arts blog at palmbeachillustrated.com.

Suzanne Niedland - Award-winning filmmaker, Broadway producer, actor and ballroom dancer, Ms. Niedland serves on boards of the Palm Beach County Film and Television Commission, The Cultural Council for Palm Beach County, the International Committee for the Performing Arts and the President’s Advisory Council at the Kennedy Center, and the DeVos Institute for Arts Management.  She earned a Master’s degree in Documentary Filmmaking and is working on a documentary about her friend, Burt Reynolds.

Hal Rosenfeld – Mr. Rosenfeld is a drummer, composer and arranger whose work can be heard in more than 80 films, television shows and video games. His credits include Grammy-winning soundtrack The Greatest Showman, Emmy-winning Fosse/Verdon, Disney's live-action Mulan, A Series of Unfortunate Events, and Kanye West's Sunday Service.

Kelsey Scott – Ms. Scott is an FSU alumna and a former winner of the SSOF. She is a twice-Emmy-nominated actress for her role in the Oscar-winning 12 Years A Slave and her two-season arc on How to Get Away With Murder.  In 2017, she received a Primetime Emmy nomination for her role on Fear the Walking Dead: Passage. She is a Celebrity Ambassador for Kids in the Spotlight, an organization that enlists professional filmmakers to train foster care youth to create, write, cast and star in their own short films.

Vanilla Ice – Rapper, entertainer and star of an eponymous home renovation series on the DIY network, Vanilla Ice actively supports and inspires youth in South Florida.  He continues to serve as an award show presenter and judge in the SSOF Music Video category as he has done for the past several years. The award now also bears his name.

Winners will be announced, and awards will be presented at an exciting, red carpet award show on Friday, April 3, 2020 at the Keith C. and Elaine Johnson Wold Performing Arts Center at Lynn University. The award show is produced and hosted by award-winning actor/director Frank Licari (South Florida PBS’ On the Town in The Palm Beaches) and attracts a standing-room-only audience of students, celebrity presenters, industry professionals, government dignitaries, media and more.

And, in a continuing tribute to the legacy of film legend, Burt Reynolds, the SSOF will present to a Palm Beach County high school senior, The Burt Reynolds Scholarship Award, a $5,000 cash prize. Mr. Reynolds was a longtime supporter and frequent presenter at the SSOF Red Carpet Award Show.

The show will be broadcast live and will be available on demand via ThePalmBeaches.TV.

Now in its twenty-fifth year of existence, SSOF has awarded more than $1.6 million.  This year, the program boasts an increased award offering, with more than $20,000 in cash, scholarships and prizes.