BOWL SEASON IN THE PALM BEACHES 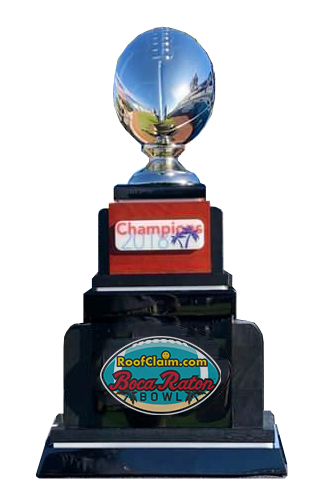 It’s beginning to look a lot like Bowl season in The Palm Beaches! This year’s Roofclaim.com Boca Raton Bowl will be televised nationally on ESPN while simultaneously broadcast on ESPN Radio and locally on ESPN 106.3 FM. Last year’s game reached more than two million households during the live broadcast. The eighth edition of this postseason classic will be played at FAU Stadium in Boca Raton on Saturday, December 18, kicking off at 11:00am. Teams are set to be announced on December 5. The bowl expanded their conference agreements last year, which opened the game to participation from Sun Belt, Mountain West, Conference USA, American Athletic Conference and the Mid-American Conference—plus independents Army and Liberty alternating each year. For more information about the event, visit roofclaimbocaratonbowl.com.